Alfred Hitchcock had never intended to become a film director. In an interview with Peter Bogdanovich, Hitchcock attributes Sir Michael Balcon, the man in charge at Gainsborough Pictures, as the man responsible for Hitchcock’s rise to becoming Britain’s leading film director. Little did Hitchcock, Balcon, or the director Hitchcock surpassed as the leading director in Britain, Graham Cutts, know that Hitchcock would also become one of the most influential directors in the history of cinema. This information comes from Tom Ryall’s book Alfred Hitchcock & the British Cinema, in which Ryall discusses British Cinema through the interwar years and the 1930s, and includes how Hitchcock’s career flourished through these years with all of the successful films he was able to produce from the small studio sets of Gainsborough Pictures.

Hitchcock’s very last film, and arguably his best British film, that he made under contract with Gaumont British, a company associated with Gainsborough Pictures, is The Lady Vanishes (1938). In an interview with Francois Truffaut, Truffaut told Hitchcock “Since I know it [The Lady Vanishes] by heart, I tell myself each time that I’m going to ignore the plot (and study the technique and effect). But each time, I become so absorbed by the characters and the story that I’ve yet to figure out the mechanics of the film.” The majority of the film takes place on a train and features plot devices of deceit, conspiracy, and a McGuffin (in the film it takes the form of a tune that must be remembered), a Hitchcock staple. Another staple of Hitchcock is the casting of a beautiful leading lady or beautiful actress in a supporting role. This time it is Margaret Lockwood in the leading role, playing Iris Henderson in the film, and she is accompanied by first time actor Michael Redgrave in the role of Gilbert. Maurice Yacowar summarizes the plot of the film briefly in her book Hitchcock’s British Films. She writes,

Iris befriends a nice old English nanny, Miss Froy (Dame MayWhitty),
but finds after a nap that Miss Froy has disappeared. The other passengers
deny the existence of Miss Froy. A brain surgeon, Dr. Hartz (Paul Lukas),
attributes Iris’s hallucinations to a bump on the head she suffered in the
[train] station. Finally Gilbert and Iris find Miss Froy, whom Hartz and his
accomplices were endeavoring to smuggle off the train and kill, in order to
prevent her bearing to the British government the secret clause of a treaty
between two countries. The railway car is sidelined in enemy territory and
the English besieged, but Miss Froy escapes, then the others. When Gilbert
and Iris reach London, their bickering has already turned to love. Iris abandons
her fiancé and goes off with Gilbert to the Foreign Office where they are
welcomed by the safe Miss Froy (232).

The bump on the head Iris suffered is initially intended for Miss Froy, who is later revealed as a spy of some sort. Instead of capturing Miss Froy right from the start, Dr. Hartz (allegorically portrayed as a Nazi) uses the symptoms of a concussion to try to persuade Iris that Miss Froy was a hallucination, but Iris is not convinced. From Yacowar’s brief plot summary it is easy to see why Truffaut gets so caught up in what is happening on screen rather than what Hitchcock was doing behind and with the camera. However, Hitchcock’s mannerisms with the camera are part of what give him supreme auteur status.

Within the confines of two small sound stages, Hitchcock is able to achieve a sense of a train speeding across Europe. In his book, so thoughtfully titled Alfred Hitchcock, Gene D. Phillips expresses his astonishment of Hitchcock’s accomplishments in regard to the lack of resources he had. He writes that Hitchcock creates cinemagic “by the judicious mingling of stock footage and model shots of trains and other vehicles with the material actually filmed in the studio (83).

Phillips notes another piece of cinemagic during a scene in which Dr. Hartz attempts to poison Iris and Gilbert’s brandy drinks. He recalls Hitchcock’s colleague Carol Reed from an interview in which Reed noted that “Hitchcock asked to be provided with a couple of glasses six and one-half inches high and four inches wide, which were to be placed three feet from the camera, with the actors five feet beyond that. ‘Hitchcock is the greatest technician in the business,’ Reed concluded” (84).

In addition to Hitchcock’s abilities as a technician, his camera movements and editing technique is notable. The Lady Vanishes opens with a panorama shot (similar to the famous panorama shot in the beginning of Psycho) that tracks across the fictional nation of Bandrika, displaying the mayhem that an avalanche has caused, and setting up the scenario that all of the characters are dealing with. The situation involves every character having to stay in town before getting on the train the next morning. In Miss Froy’s room at the resort where everyone is staying, an open doorway to her balcony is symmetrically framed in the center of the shot and the camera moves forward in what appears to be a combined zoom and track from the inside of the room to outside on the balcony. Music from downstairs draws Miss Froy to the balcony (the tune that later is known to be the McGuffin) and the motivated camera movement indicates the importance of this seemingly unimportant moment early in the film. On the train when Iris begins to fall asleep before awakening to an empty seat where Miss Froy once sat, Hitchcock uses an editing style comprised of double exposures, fading focus, and multiple frames on the screen at the same time to illustrate Iris falling asleep. 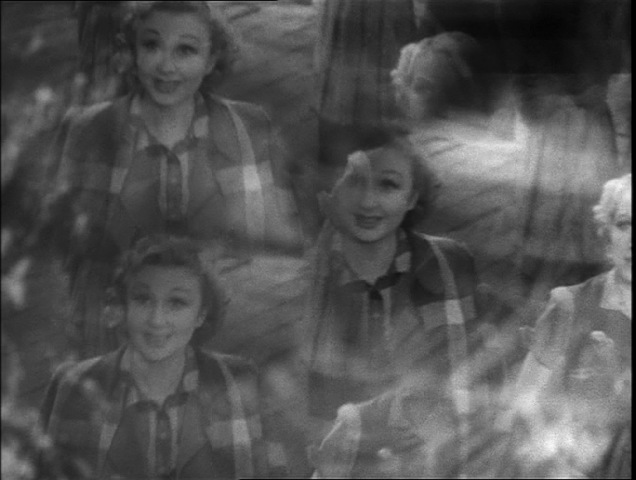 Yet, the possibility remains that the knock on the head Iris received did create symptoms leading to hallucinations like Dr. Hartz suggested. This creates some doubt and mystery for viewers to attempt to figure out just as Iris must do. Hitchcock’s ability to create this mystery and create a film full of suspense are part of what critics believe make him one of the greatest auteurs of all time.

As an auteur, Hitchcock films are generally not described as light and airy. However, part of The Lady Vanishes is a light and humorous tone; yet this is not the overall tone of the film as the described plot of the film may indicate. In the beginning of the film when all of the action is occurring at the resort in Bandrika, we are introduced to two comic relief characters, Caldicott (Naunton Wayne) and Charters (Basil Redford). They are forced to stay in the low ceiling room that the maid would normally stay in because of full occupancy at the resort. This results in several head knocks thanks to the low ceiling, similar to what may be seen in pratfall full Charlie Chaplin or Buster Keaton silent film comedies. Another comedic moment occurs on the train when Iris and Gilbert discover a vanishing cabinet magic trick in which the back wall of the cabinet turns to make it seem like a person “magically” disappears. The scene works in what has become a clichéd way with Iris disappearing then reappearing at the exact wrong time as Gilbert disappearing and reappearing. The lighter moments give the film an extra dimension that critics seem to praise in regards to Hitchcock’s whole body of work.

The Lady Vanishes works as a way of exemplifying Hitchcock’s growth as a director in the transition years of his move from British cinema to working with David O. Selznick in Hollywood. In concurrence with a piece on Slate.com titled “The Lady Vanishes: Hitchcock’s First Hitchcock Film”, the author of the article, Nathaniel Rich, believes

The film displays the best qualities of his British career—immaculate timing,
delicacy, and danger—but here Hitchcock delves more deeply than ever before
into the anxieties and secret terrors of prewar English society. By doing so, the
film provided a template to which Hitchcock often returned in his American
masterpieces, revisiting the same narrative strategies in increasingly devious
and innovative ways.

In reading several reviews of the film, including a couple listed on the Criterion Collection website, all seem to agree with Hitchcock’s unprecedented way of crafting suspenseful pacing and intelligent way of incorporating political background into the film. While this may be the focus of most reviews, Truffaut additionally notes that part of what makes Hitchcock so great is his technique and Hitchcock’s technique is on full display in The Lady Vanishes. After one final film in Britain, Jamaica Inn, Hitchcock made his way to Hollywood to begin another era in his historic career.