The hats Scarlett adorns for various scenes of the film each have a special exploitation of a certain aspect of her personality, her relationship with the men in her life, Ashley and Rhett, as well as express her consistent obsession with the materialistic things in life. Hats become a symbol of success and wealth for Scarlett. She is wearing an extravagant hat usually in the presence of Ashley (the green hats and the white hat). She tries to lure Ashley in by looking like an object. But, Rhett acknowledges that part of her and seems to be the only man to respond to it.
The later hats show that one man cannot exist in her life without the other. When she is wearing a hat, one personality trait of hers is usually being abused to attract attention. 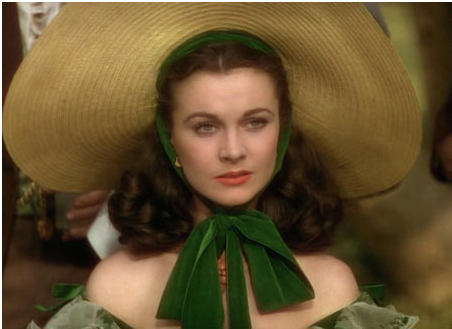 Before the War, Scarlett is engulfed by her sophisticated Southern Belle status in society. She is all about being excessive in her dress and demeanor. She also is immediately seen as being extremely lustful after Ashley Wilkes, who lives on the neighboring plantation. In the first scene of Scarlett being surrounded by other Southern Belles, she is wearing a broad sun hat with a green velvet ribbon. This hat is exploiting her dramatic, immature nature. In this scene, she makes it a point for all the eligible bachelors to know just how pretty and desirable she is. The wide brim takes up almost the whole span of the shots presented with her talking to various characters at the barbeque. This makes her forcefully become the center of attention during the scenes at Twelve Oaks. Whenever there is a reverse shot of Scarlett during conversation, her hat takes up almost all the free space as she he pouts, bats her eyelashes and talks in an almost baby-like voice in order to attract attention. But, the one man she really wishes to attract is Ashley Wilkes, who is betrothed to another woman. This first hat illustrates who Scarlett is first painted as: an over the top, lying, flirtatious Southern Belle who makes it a priority to have every man and woman talking about her and lusting after her. This hat is large and distinctly different from the hats (or bonnets rather), of her fellow Belles. It serves as her halo of naivety—she is convinced Ashley loves her and wants to marry her, not Melanie Hamilton, who he is rumored to be engaged to. In this specific close up of her looking at Ashley with Melanie across the yard, her hat is serving like a big frown. The rumors of Ashley’s marriage are confirmed as she looks longingly at Ashley. She is dramatically downtrodden and first develops the jealousy that will fuel her motives throughout the film at this moment. That particular moment sets the tone for the rest of the film because this is when the audience first sees Scarlett’s jealousy and real desire for Ashley. She is looking at Ashley and Melanie together, showing their affection for each other and obvious indication of their upcoming marriage.

The next hat is a Parisian gift from Rhett Butler, the man lusting after her as she lusts after Ashley throughout the film. It is an elaborate hat with green velvet and a collection of green feathers at the crown. It also has a similar green chin tie to the first hat to illustrate that she still is very flirty and immature, even though she has grown older. The same hat is used in two very different scenes. She is giddy and playful when being presented with a gift by Rhett. She is definitely first shows her love for materialistic things when with Rhett when she gets this hat. The next scene (right) is when she wears the hat to the train station when Ashley is on Christmas leave from the war. 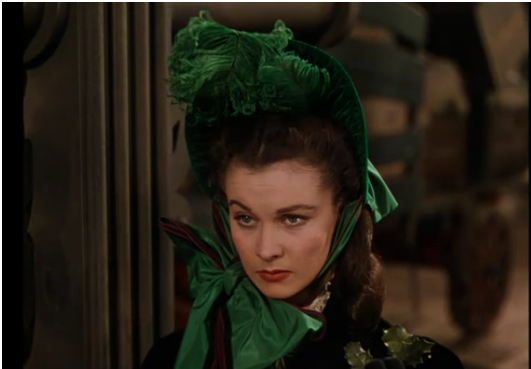 She wants to look extravagant to attract the eye of Ashley when he comes home for Christmas, although he is officially Melanie’s husband. This action, although the hat is a gift from Rhett, is the first indication of the game she plays between the two men. It is the start of the love triangle. She plays at Ashley with her sex appeal, but he never buys it. Rhett, on the other hand, eats it up. Throughout the film, she uses Rhett as a ploy in order to make Ashley jealous, or Ashley as a ploy to make Rhett jealous. Rhett cannot exist in her heart without Ashley.
Green can have positive associations, but also be associated with negative traits. The first hat with the green ribbon indicates her “passion for life,” while this hat exploits her envious and jealous personality trait (Howard). Scarlett is completely green with desire while watching the reunion of Ashley and Melanie at the train station (right). These first two hats are seen in the initial phase of her personality: naïve and sly, as well as flamboyantly flirty and girly—young. 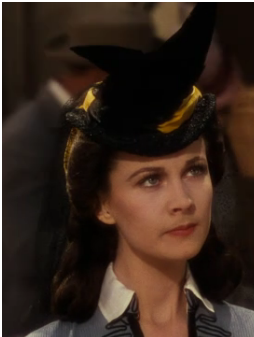 After the war is over and Scarlett is in the middle of rebuilding Tara Plantation’s previous wealth and status, she is seen leaving the very lucrative lumber business she starts with her second husband, Frank Kennedy and the infamous Ashley Wilkes during the middle of Reconstruction. She walks out to be greeted by none other than Rhett Butler, who seems to have returned to Atlanta. She is wearing an extremely interesting hat to say the least. It is a statement hat, showing her ever-growing success and wealth by rebuilding Tara and becoming a businesswoman. It shows her impertinent desire to show others how successful she is becoming. This scene takes place right before she gets mugged by vagrants along the road on the way back to Tara. The structure of the feathers on this hat is somewhat like the feathers of a bird of paradise, showing off its black feathering to the world. She is very extravagant with this hat, wanting to show how successful she is getting with her business—almost boasting. While being mugged, she gets knocked down right off her high horse—her hat even gets knocked off in the beginning of the mug scene. This hat is a symbol she uses to let others know she is back on track with wealth—and so when it is knocked off her head, the action is saying she is still not clear of troubles in her future.

The final hat with significance is the hat she is wearing when she is caught hugging Ashley by his mother and sister, which is apparently cheating by Civil War standards. This hat, with its white netting, lace detail on the actual hat, and elaborate brooch, makes it very wedding-like. Scarlett and Ashley are reminiscing about old times—the fact that her hat is very wedding-like is indicating her persistence with still loving Ashley, although she is married to Rhett at this time. Her love for Ashley does not end until the death of Melanie, when she comes to the realization that Rhett is the one man who really loves her for her, despite her aggressive and sometimes unbecoming attitude. Interestingly enough, she does not wear hats at all after this realization—she has no one to impress or lure in anymore. With the previous hats, she had a motive on who to attract: Ashley or the society that she feels constantly judges her. The one person she always really needed, Rhett, does not need to be impressed. Unfortunately, she is too late about finally making this mature decision.